Change your life with a Unicaf Scholarship. 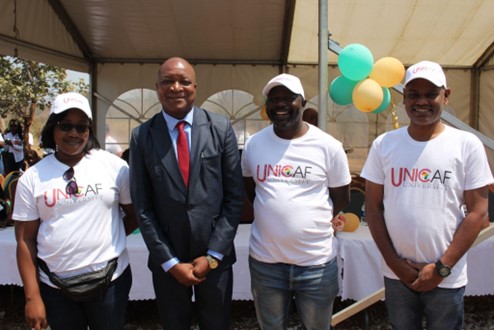 Over 250 children are celebrating throughout Lusaka’s Chongwe District following the official opening of the newly built Mwalukanga School.

Unicaf University, alongside other stakeholders, took part in the inauguration ceremony which was graced by the Minister of Education, the Honorable Douglas Syakalima. In his speech the honorable minister thanked Unicaf University for being a part of the initiative. He emphasised the importance of education which is why the New Dawn government has introduced free primary education.

Speaking on behalf of Unicaf University, Dr Marirajan Thirupatthi stressed the importance of helping those less privileged. He highlighted how Unicaf University works towards ensuring high quality education through its scholarship program. He also pointed out that Unicaf University is in the process of building a new campus, signifying its commitment to remaining in Zambia and improving the higher education status quo.

Mwalukanga is a donor-built school pioneered and initiated by the Mrs Mizinga Melu-led foundation, When Females Lead. Prior to its completion pupils would have to walk 10 kilometres to the nearest school.