What is the best survival tool? Burmese politician and civil rights campaigner Aung San Suu Kyi suggests that humour is one of the best ingredients of survival. 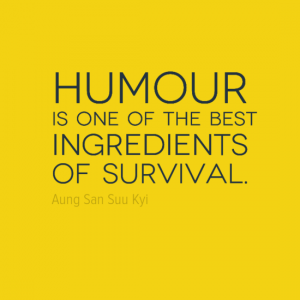 Who is Aung San Suu Kyi?

Aung San Suu Kyi is a Burmese politician. She has spent almost 15 years under house arrest in Burma because of her political views. She was most recently released from house arrest in November 2010 and successfully campaigned to become a member of parliament in 2012.

Born in Rangoon in Burma in 1945, she grew up in Rangoon with her mother and two brothers. Her father had helped to negotiate Burma’s independence from the British Empire in 1947 but was assassinated by his rivals in the same year.

Suu Kyi obtained a BA degree in Philosophy, Politics and Economics from Oxford University in England in 1969. Following her graduation she moved to New York, USA and spent 3 years working for the United Nations.

In 1988, Suu Kyi returned to Burma to care for her ailing mother. She  also began to lead the pro-democracy movement in the country but was later placed under house arrest by the military regime. Although Suu Kyi was offered freedom if she left Burma she refused and remained under house arrest. Consequently, she was only able to see her husband 5 times between 1989 and his death in 1999.

Suu Kyi was particularly influenced by Mahatma Ghandi’s philosophy of non-violence and by Buddhist concepts. She received worldwide recognition for her struggle and in 1991 was awarded the Nobel Peace Prize. In 1992, she was awarded the Jawaharlal Nehru Award for International Understanding by the government of India. In 2007, the Government of Canada made her an honorary citizen and in 2012 she was presented with the Congressional Gold Medal, one of the highest civilian honour’s in the United States.