What is the secret to success?

This famous scientist, attributes his success to his tenacity. 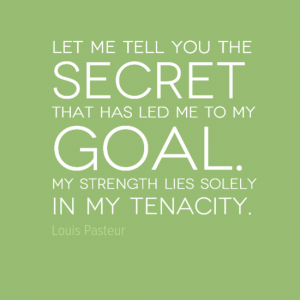 Who was Louis Pasteur?

Louis Pasteur was a French chemist and microbiologist renowned for his discoveries of the principles of vaccination, microbial fermentation and pasteurization. He is remembered for his remarkable breakthroughs in the causes and preventions of diseases, and his discoveries have saved countless lives ever since. He reduced mortality from puerperal fever (a condition that results from an infection of the female reproductive organs, contracted during or following childbirth or miscarriage), and created the first vaccines for rabies and anthrax.

Pasteur was born in France in 1822. Born into a poor family he was an average student in his early years. He frequently failed exams but persisted and eventually gained a Bachelor of Science. He married in 1849 and had 5 children, however only 2 survived to adulthood, the other 3 died of typhoid. It is believed that these early tragedies motivated him to cure infectious diseases.

Pasteur’s scientific research demonstrated that the growth of micro-organisms was responsible for spoiling beverages, such as beer, wine and milk. With this established, he invented a process in which liquids such as milk were heated to kill most bacteria and moulds already present within them. This process was soon afterwards known as pasteurization.

In addition to this discovery, Pasteur created a cure for anthrax – a disease that mainly affects cattle. This success encouraged him to develop a cure for rabies – a very common disease at the time. He considered experimenting on himself by subjecting himself to rabies and then trying his cure. However, before he could implement his scheme a young boy was brought to him who had been bitten 14 times by a rabid dog. His treatment was a success and news of the treatment spread.

Pasteur died in 1895, aged 72. His legacy survived his death in the form of his discoveries and numerous streets, schools and hospitals around the world have been named in his honour.