This week we feature a quote from Italian architect, engineer, sculptor, painter and poet – Michelangelo. 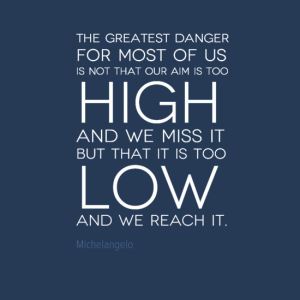 Michelangelo was born in the Republic of Florence (present day Tuscany, Italy) in 1475. His father was a government administrator and after the death of his mother when he was aged 6, he lived with a stone cutter and his wife and family. Afterwards Michelangelo was sent to Florence to study, however he showed no interest in his schooling, preferring to copy paintings from churches and seek the company of painters. In 1488, aged thirteen, he was briefly apprenticed before returning to schooling.

From 1493, (aged approximately 18) Michelangelo began producing commissioned carvings from wood and marble. In 1504, he produced his most famous work, the Statue of David. This work established his prominence as a sculptor.

In 1505, Michelangelo was commissioned by Pope Julius II to build a tomb in Rome. Michelangelo worked on the tomb for over 40 years and it was never finished to his satisfaction. He may however have been somewhat distracted given that during this time he painted the ceiling of the Sistine Chapel in the Vatican.  He persuaded the Pope to give him a free hand and proposed a complex scheme, representing the Creation, the Fall of Man, the Promise of Salvation through the prophets, and the genealogy of Christ. The composition stretches over 500 square metres of ceiling, and contains over 300 figures.

In his personal life, Michelangelo was abstemious, that is, indulging only very moderately, especially food and drink. He told his apprentice, Ascanio Condivi: “However rich I may have been, I have always lived like a poor man.”