The following is a famous Scottish American businessman and philanthropist, Andrew Carnegie. 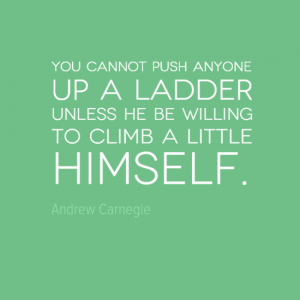 Who was Andrew Carnegie?

Andrew Carnegie was born in Scotland in 1835. His life began in the humble surroundings of a one room house. When his father fell on hard times in 1948, he borrow money to move the family across the Atlantic Ocean to begin a new life in Pennsylvania, USA.

Life in the USA was also hard with the 13 year old Andrew Carnegie having to work 12 hours a day, 6 days a week changing threads in a cotton factory. A few years later, Carnegie became employed as a telegraph messenger. Carnegie was a very hard worker and was soon promoted to the role of operator. He was also an avid reader and through his love of reading was able to educate himself. At the age of just 18 Carnegie began working for the Pennsylvania Railroad Company and began his rapid advance through the company ranks learning much about management and costs control along the way.

Over the next few years Carnegie made a series of investments in railroad-related industries (iron, bridges, and rails). This enabled Carnegie to slowly accumulate capital, the basis for his later success. He later went on to establish businesses that supplied rails and bridges to the railroad, including the Carnegie Steel Company, which was the most extensive integrated iron and steel operations in the USA. In 1901, Carnegie merged his company into US Steel and sold his share for US$492 million.

What is truly remarkable about Carnegie is that when he died in 1911, at the age of 83, it is estimated that Carnegie had given away US$350 million (approx. US$4.8 billion adjusted to 2010 figures) of his wealth. Even at his death his last $30 million was given to foundations, charities, and to pensioners.

Carnegie chose to spend his last years as a philanthropist giving away the vast fortune he had accumulated. From 1901 forward, he devoted his life to providing the capital for purposes of public interest and social and educational advancement. Among his many philanthropic efforts, the establishment of public libraries throughout the United States, Britain, Canada and other English-speaking countries. He also gave funds to churches, universities and the poor. The Andrew Carnegie Dictum was as follows: